Tourism in Rwanda: Why has Rwanda become a top safari destination in East Africa?


When it comes to safari holidays, there are options aplenty in Africa, especially in the eastern portion of this massive continent. Yet, despite all the competition it faces, Rwanda is among the top destinations for those headed on safari.

Why is this? Consider the following points, and you’ll understand why this nation has become such a popular place to visit. 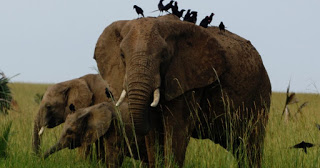 Rwandans call their nation ‘the land of a thousand hills’ - soon after arrival, you’ll understand what they meant by that. Everywhere you go, you’ll be surrounded by undulating terrain which will be the subject of almost as many pictures as the animals you are there to photograph. When you combine to the two it presents the opportunity for some truly award-winning photographs for your Rwanda tours during your trip.

The landscape is mostly beautiful in a subtle way, but not always – the Virunga volcano chain dominates the skyline in the northwest, with Mount Karisimbi towering over all others at almost 15,000 feet above sea level.

There are also plenty of lakes, with Lake Victoria being the most commanding of all – with a depth of over 1,500 feet, it is among the deepest in the world and home to countless members of the animal kingdom.

Rwanda is an easy country to navigate

Comparable in size to Albania, Rwanda is an easy country to navigate. A prime example of this: Kigali is situated within a three hour drive from Volcanoes National Park.

It is here where many of Rwanda’s mountain gorillas can be found – this makes it easy to get this highlight checked off so you can take in the other highlights of this compact and intriguing nation in East Africa.

The 21st century has seen the LGBT community make huge strides towards tolerance and acceptance throughout the world. Sadly, many parts of Africa have fallen behind on this front, but not Rwanda.
Unlike its neighbors, Rwanda does not have any discriminatory laws targeting homosexuals, but it has gone further than that.

In 2011, this country was one of only six nations in Africa to sign on to a joint UN statement which condemned homophobic violence against LGBT people worldwide.

In 2017, they did the same for a statement condemning nations who put same sex couples to death for engaging in consensual intercourse.

While Rwanda may not be perfect on the issue of LGBT acceptance, it is miles ahead of its neighbors on this matter and many other countries around the world.

Volcanoes national park Rwanda protects over 500 mountain gorillas whose numbers are at an increase in the recent years. Rwanda offers 10 habituated gorilla families in Volcanoes national park which are available for tracking all year round. Rwanda has become a more popular destination because of the easy for tourists to reach the gorilla national park with only 2 hours’ drive from the Kigali international airport.

It was in Volcanoes national park where Dian Fossey shot her famous documentary, Gorillas in the Mist, in 1967. Although she was killed by poachers in the 1980s, a non-profit set up as her legacy has since worked with the government to help double the population of these magnificent species of primate.

If you decide to check them out, be ready to get dirty – tracking gorillas can be a messy business, with plenty of bush whacking and scaling steep muddy slopes required just to find where they are situated within their protected reserve.

This sacrifice and the considerable fee you’ll need to pay will be worth it in the end, as they are peaceful and tolerant of people viewing their activities so long as they are respectful of their space. Knowing this, do whatever is asked of you by guides, and you will be certain to have an amazing experience.

Plenty of other unique animals can be found here as well

Don’t lose the forest for the trees as you explore Rwanda – there is more to see here than just mountain gorillas. For instance, Akagera National Park is a reserve which is home to the Big Five mammals of Africa – lions, elephants, rhinos, leopards, and buffalo. It also has plenty of hippos, crocodiles, and zebras, as well as 483 identified avian species.

Want to observe chimpanzees as they swing playfully from one branch to another in their natural habitat? Nyungwe Forest National Park is where you’ll want to head, as this preserve is known for this species of primate.

The country itself has a compelling history

When you aren’t busy shooting this nation’s fauna and dramatic landscapes, spend some time in Kigali brushing up on Rwanda’s backstory. It is one with plenty of ups and downs, from countless generations of tribes co-existing together in relative harmony to the infamous Rwandan genocide, which saw upwards of a million Hutus killed back in 1994.

The best place to learn about the history of Rwanda is the Kigali Genocide Memorial and the National Museum of Rwanda – depending on your schedule, you can make time for these institutions at the start or end of your visit in Rwanda.

It is a remarkably safe country

Despite the horror of the Rwandan Civil War and the genocide it precipitated, this nation is actually one of the safest countries in Africa. It is rare to hear about a crime being committed against a foreigner here – so long as you take common sense precautions you would take in your home country, there isn’t anything out of the ordinary you should be worried about.