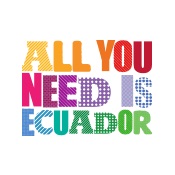 
Now .travel is open to everyone. Haven’t got your Member Number (UIN) yet? Obtain it here: http://www.travel.travel/obtain-uin/
Posted by eTN Editor at 9:41 AM