Leipzig, a great city of culture and arts set in beautiful surroundings

A 70-minute train ride from Berlin, Leipzig is a buzzing city in the east of Germany. The cultural and architectural beauty of Leipzig has always been a source of inspiration for creative minds such as the composers Johann Sebastian Bach, Felix Mendelssohn-Bartholdy, Robert Schumann, and Richard Wagner. Hardly any other city can claim as rich a musical heritage as Leipzig. The Gewandhaus Orchestra has cultivated classical music in Leipzig for over 250 years. St. Thomas' Boys Choir was founded over 800 years ago by the Augustinian Canons, and the Opera House is the third oldest civilian music theatre stage in Europe. The majority of the composers’ homes and workplaces are still standing today. This is unrivaled in Germany and, in international terms, is second only to Vienna. 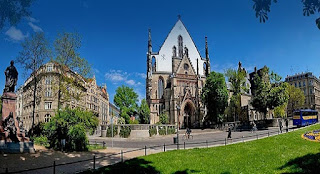 Unique in Leipzig, however, is the proximity of these sites: You will experience 300 years of musical history in one afternoon! Opened in 2012, the so-called Leipzig Music Trail (“Leipziger Notenspur”) connects 23 authentic sites of Leipzig’s music history on a 5.3 km walking trail.


The world’s oldest trade fair city, Leipzig is also home to Germany’s second-oldest university. It was in Leipzig that, in 1989, the first Peaceful Revolution in history was started: On October 9, 1989, more than 70,000 people congregated in the streets of Leipzig to protest against the GDR regime. The demonstrators called out “We are the People” and “No violence.” The Monday demonstrations remained peaceful and set the course for fundamental change in Europe: The Berlin wall fell only one month later. Today, Leipzig is livelier than ever. The city's vibrant contemporary arts scene centers around the Spinnerei and the New Leipzig School of painting with key figure Neo Rauch.


Leipzig Region offers a host of possibilities: An amazing diversity of nature, culture, history, and architecture are right on Leipzig's doorstep. Three areas of countryside around Leipzig, which couldn't be more different from each other, epitomize diversity: With its 22 lakes, the Leipzig New Lakeland area is the ideal place for recreation, swimming and all kinds of outdoor activities and trend sports. The Saxon Heathland area, which includes the beautiful Düben Heath and Dahlen Heath, is just perfect for walking, cycling, and riding. And in Saxony's Castle Country, there are countless romantic towns and historic castles, monasteries, and manor houses waiting to be discovered – 20 to 90 minutes away from the city at the most.


As the official tourist board, Leipzig Tourism and Marketing promotes the Leipzig region worldwide as a travel destination. It provides information, accommodation, guided tours, day trips for individuals and groups, incentives, as well as conference and event locations.


Leipzig Tourism and Marketing is proud to use .travel to promote its beautiful city. Visit the website http://www.leipzig.travel to plan a trip to the Leipzig region.

Now .travel is open to everyone. Haven’t got your Member Number (UIN) yet? Obtain it here: http://www.travel.travel/obtain-uin/
Posted by eTN Editor at 1:03 PM