Not to be missed cultural tourist stop in Vietnam

What sets Khai Dinh's tomb apart from the others is its architectural fusion of Chinese, Vietnamese, and European Gothic elements. There are fierce dragons guarding the steps, stone elephants and warriors outside, and finally, massive wrought iron gates at the entrance. The inside of the tomb has some of the Emperor's personal effects and gifts, as well as incredibly intricate patterns of ceramic and glass decorating the walls. 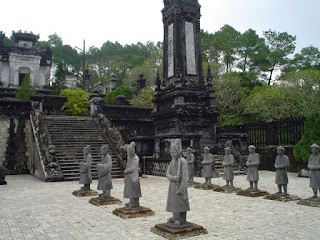 Following in the footsteps of most of his Nguyen predecessors, Emperor Khai Dinh planned ahead of time for his final resting place. When he kicked the bucket in 1925, Khai Dinh was laid to rest in his lavish tomb, complete with a golden effigy of himself in the inner chamber. 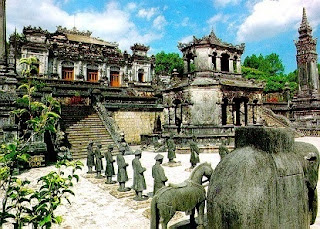 The exterior iron and stone are juxtaposed by a truly magnificent interior reflective of a prodigious Emperor. Ironically, the tomb is less a monument to the Emperor himself but more a monument to his excessive wealth and disconnect from the ordinary man. Khai Dinh was reputed to be a pawn of the colonial French -- so much so, he was mocked as a salaried employee of the French government -- and he taxed his people heavily to finance the building of the elaborate edifice. 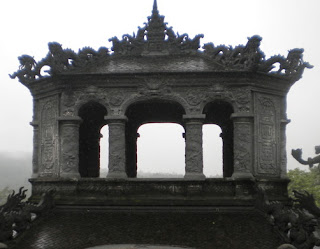