Vietnam has a bridge that is definitely worth a trip to take a selfie. 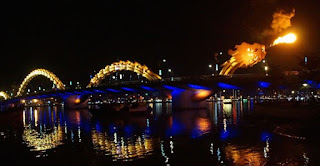 Upon a 1,864-foot-long bridge, a steel dragon breathes fire as drivers pass under it. Yes, real fire.

Watching it shoot fire might seem a bit terrifying for the six lanes of traffic that drive beneath the mythical giant, but it can also playfully spray water from its mouth.

The bridge opened on March 29, 2013 to commemorate the 38th anniversary of the taking of the port city of Da Nang by the North Vietnamese near the end of the Vietnam War. The metallic dragon was modeled on one from the Ly Dynasty and is illuminated with 2,500 LED lights.